Ever wonder what’s ripe at the Crescent City Farmers Market this week? Who will be there? Who is cookin’? Sign up here for our popular electronic newsletter Market Morsels to learn recipes, market updates, and food preparation tips from our own vendors, chefs, and shoppers. It’s published each Monday so you can prepare to shop for the week!

Thanks for signing up!

Dennis Guarino didn’t expect to end up working on a farm. While in between jobs, he began working on a farm near his childhood home in the River Parishes. Eight years later, Dennis is a familiar face at the Crescent City Farmers Markets, where he’s sold everything from okra to peaches. Dennis still works for the same farm in Montz, LA owned by Timmy Perilloux. Dennis has known Mr. Timmy since he was only ten years old, and you can often find him peddling the fresh produce grown on Perilloux Farm. With vegetable growing season slowing down, Dennis has spent the summer selling peaches fresh from Pontotoc, MS for Cherry Creek Orchards. Dennis says his favorite part about his work at the market is meeting people and making new connections with customers and vendors alike. 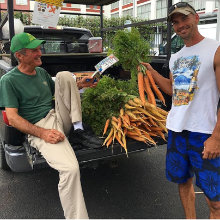 All You Need Institute

Lana’s Sweets for All Occasions

Market Umbrella is an independent nonprofit 501(c)(3), based in New Orleans, whose mission is to cultivate the field of public markets for public good. Market Umbrella has operated the Crescent City Farmers Markets (CCFM) since 1995.